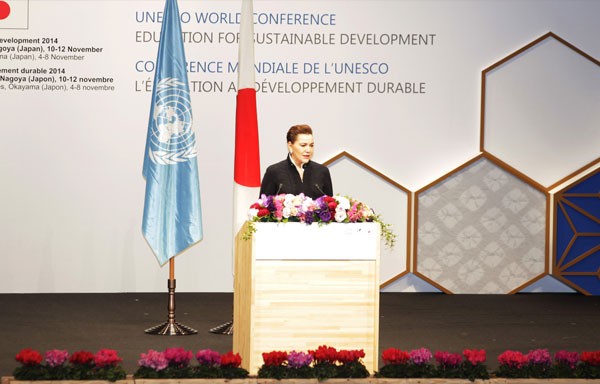 Praise be to God, May peace and blessings be upon the Prophet, His Kith and King

Your Imperial Highness the Crown Prince of Japan,

Your Imperial Highness the Crown Prince of Japan,

It is a real pleasure to take part in this world conference which is being co-organized by UNESCO and the Government of Japan, and in which I am particularly interested.

I should like, first of all, to pay tribute to the Japanese authorities, for the warm welcome and the good organization of this international event.

I also wish to extend my sincere thanks to the Director-General of UNESCO for inviting me to take part in this meeting as guest of honor.

This is a watershed moment which not only marks the end of the United Nations Decade of Education for Sustainable Development (2005-2014), but which is also an opportunity to draw up a new global agenda for the coming years.

Enjoying substantial autonomy in terms of means and action, the Foundation which I have the honor to chair reflects, above ail, a desire at the highest level of the state to put the citizen at the heart of the country’s sustainable development strategy.

ln this respect, Morocco’s new Constitution refers explicitly to the right to sustainable development and to a healthy environment. lt also recognizes the important role to be played by civil society and NGOs in raising public awareness and in promoting the citizens’ participation in public affairs.

To think and act for the sake of the environment – in the broadest sense of the term – means to be fully aware that the planet is not only a precious legacy, but that it also implies a tremendous responsibility for us in terms of preserving the interests of future generations.

That is why. present and future generations are the main focus of the Mohammed VI Foundation’s action. lt is for them and through them that we seek to raise awareness and to educate people on values and behaviors conducive to sustainable development.

The Foundation acts, first, at primary school lever. Consistent with its usual approach, in partnership with the Ministry of Education and associating teachers’ and educators’

organizations, elected officials, local NGOs and economic operators, the Foundation seeks the emergence of a new, “eco-friendly” generation that believes wholeheartedly in the values of sustainable development.

ln secondary schools, our action seeks to stimulate young people’s curiosity and interest by making them aware of their individual and collective responsibilities towards the environment.

Our Foundation is also currently involved in setting up an education canter for sustainable development to serve as a center for resources and skills development.

We see the media as a key actor and partner. We are also particularly interested in the various forms of awareness-raising and mobilization provided by the new information technologies and social networks, thanks to the change in scale and the massive impact our campaigns can have.

One of the main challenges in the area of education for sustainable development is that of pertinence and efficiency in the field; we want our efforts to be more than mere words, which sometimes have no tangible effect – however sincere they may be.

Explaining what we should do is not enough: we must lead by example in the field, in a coherent manner. To that end, an active pedagogical approach must be developed.

In this process of learning through example, major national projects can have a positive ripple effect. This is clearly shown by the ambitious Moroccan solar project – the largest in the world – which arouses young school children’s and students’ interest

in clean technology and leads to innovation contests at schools, solar car races and other similar praiseworthy initiatives.

To educate and to take action: these are the two guiding principles that go hand in hand in all of the Foundation’s programs. lt is the basis upon which the Foundation rallies all segments of society to support concrete local objectives that have a direct impact on the citizens as well as an important educational dimension. lndeed, the Foundation’s motto is “The environment is everyone’s concern”.

Whether with regard to the “Clean beaches” initiative – Morocco has approximately 3,600 km of coastline – the plan to protect the Marrakech palm grove, the rehabilitation of the Kingdom’s historic parks and gardens or the improvement of air quality, our approach is always explained in a practical, concrete way, with special emphasis on how the degradation of our natural heritage occurs and how to preserve it.

Thus, during the preparation of the National Report for the “Rio+20” Conference in 20I2, the Foundation held a forum on responsible consumption modes. This provided an opportunity for a group of high school students to compare their ideas with those of officiais, civil society actors and media representatives, enabling them to put forward many pertinent, practical recommendations.

This exercise was repeated the following year, on the occasion of the 7th World Environment Education Congress, held in Marrakech in 20I3, when high school students were involved as citizen journalists.

Finally, I wish to mention the importance and raie of religious education, which should not be excluded from our collective efforts. On the contrary, it should be included because it helps muster the symbolic resources of the nations’ intangible heritage – for example to raise public awareness of the rational use of water resources. This is an essential element which should not be overlooked in education for sustainable development.

Much remains to be done in the area of education for sustainable development. Each one of us, according to our means or status, is called upon to make a contribution, however modest, and to show perseverance as part of a coherent, overall strategy.

Working towards the development of this coherent strategy and mustering the means required for success constitute the dual challenge we shall be faced with in the coming decade as new goals are proposed under the United Nations’ post-20I5 Agenda.

I should like to commend UNESCO’s leadership in the area of education for sustainable development and to congratulate all stakeholders on the proposed platforms for action.

This ethical requirement for coherent action applies to all of us: in the North as well as in the South, at country level as well as in international forums.lt is just as necessary as the requirement of pertinence and efficiency, which are sometimes lacking in many initiatives, despite the goodwill of the actors concerned.

Education for sustainable development is both a challenging task and a long struggle since it targets attitudes and seeks to change reflexes and modes of behavior in our societies. As such, it is a task that calls for sustained, crossgenerational momentum to fulfil the ambition of seeing the emergence of informed, comm itted global citizens who are responsible for their own future.