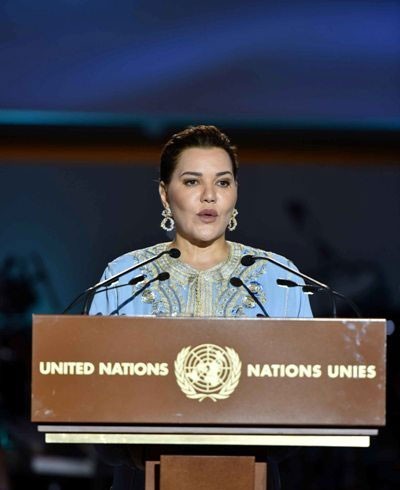 An agora for all sorts of music and an everlasting stage for cultural diversity, Morocco has deliberately chosen to identify with the most innovative, intertwined expressions of artistic creation, whether in the field of music or those of literature, the plastic arts and the cinema.

It is this demanding yet stimulating task that the first Mediterranean Concert has pertinently opted for; and it is this path to openness and modernity that Morocco wants to pursue at your side, unwavering in its belief that music is never more beautiful than when it is invited to the banquet of universality and when its scores heed no boundaries.

To celebrate the Mediterranean is to celebrate Humanity and the ideals of peace, tolerance, justice, equality and liberty that are enshrined in the United Nations Charter and the Universal Declaration of Human Rights.

What other more emblematic place is there than the Human Rights and Alliance of Civilisations Room, which was designed and created by Miquel Barcelo, to remind us that the Mediterranean – that of Aristotle, Averroes, Maimonides, Al Idrissi and so many other thinkers, that Mediterranean which unites us and brings us together and which we want to see fully reconciled with our intertwined memories – can only really be ours if it is fully shared by us all.

Building on this rich heritage, Morocco has been consolidating its Arab and African Mediterranean roots, positioning itself as a bridge between Europe and Africa, between the East and the West.

The history of the Kingdom of Morocco is a celebration of diversity – a key feature of our identity which has always been nurtured by the various dynasties that have existed in the country, in symbiosis with the Moroccan people. The Kingdom of Morocco has wholeheartedly embraced this choice, enshrining it in the preamble to its Constitution, which states that national unity was forged by the convergence of Arab-Islamic, Amazigh and Saharan-Hassani components, adding that it was enriched by African, Andalusian, Hebrew and Mediterranean elements.

The humanism and modernity of the Moroccan approach are in line with the values advocated by the United Nations, namely those of the dialogue of civilizations, cultural diversity and the rejection of all forms of extremism.

We have stressed, time and again, that a country’s wealth should not be measured only in terms of economic indicators, but also – and especially, I would say – in light of its soft power, its stability, its history, its cultural richness and the depth of its heritage.

The artists who will be performing tonight will reflect the rich mosaic of Mediterranean memory – that of a region which is proud of its influence and of its interactions. Singers will invite us to sail across the Mediterranean. These Mediterranean polyphonies will prompt a collective introspection exercise that will lead each one of us to conclude that music and art clearly show that what unites us is far more important than what divides us.

Holding this concert today in the tragic, deteriorating environment prevailing in the Mediterranean provides an opportunity to celebrate, if only momentarily, our most exhilarating values – those of humanism, tolerance, freedom, dignity and mutual respect.

And yet, there is no overlooking the fact that there are many perilous fault lines in the Mediterranean, ranging from the much desired but constantly postponed peace in the Middle East, the upsurge in violence, terrorism, extremism and inward-looking, isolationist attitudes, the migration tragedies, the management of common resources and environmental protection.

Our Mediterranean region is at a crossroads. More than ever, it is facing the turmoil, volatility and tragedies caused by the flow of desperate people in search of a better future. Is it not ironical that this sea, which was once a nurturing mother, has now become a graveyard, where bodies are piling up and dreams are being shattered, again and again – those of migrants and refugees fleeing the horrors of war and conflict?

We must reassert our human values and restore the greatness and splendor of the Mediterranean. Morocco, a nation which is proud of its Mediterranean identity, is working with other countries to achieve that objective.

To face up to the fearmongers and isolationists who feed on extremist ideologies, we must show courage and resolve in order to talk to one another, listen to each other, understand and accept each other, and act together for the sake of all we have in common. The Mediterranean must become, once again, an area of lasting peace and shared prosperity. It should, once again, stand for sharing, mutual respect, tolerance and diversity.

It is probably at this level that artists have a role to play – that of making sure that this legacy we have inherited from the Mediterranean remains alive; that our interaction with the Mediterranean is peaceful and refined. More than ever, it will be incumbent on us to embrace our Mediterranean identity and to reclaim the spirit of the Mediterranean thanks to which that sea has played such a decisive part in the history of mankind.

I wish this first Mediterranean Concert every success and I hope this initiative will be institutionalized to ensure its sustainability.

It is vital, today, to muster all energies in order to underscore the importance of art and the nobility of culture. It is just as important to create conditions conducive to the kind of environment that encourages creativity and thought. I do hope Mediterranean countries will embrace the Mediterranean Concert and similar cultural initiatives by mobilizing their thinkers and their artists to face up to the proponents of reclusiveness, intolerance and extremism.

We need, more than ever, to reclaim the Mediterranean as a meeting point of cultures and civilizations.